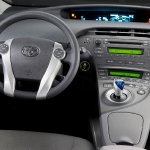 Celebrated as the benchmark for cars of the future, the Prius has delivered superior fuel economy and ultra-low emissions to more than one million owners worldwide for more than 10 years.
The midsize third-generation 2010 Prius will offer even better mileage ratings, enhanced performance, and innovative design features. It will be quieter, roomier, and equipped with advanced standard and available features such as a moonroof with solar panels, four driving modes, Intelligent Parking Assist (IPA) and steering wheel touch controls that display on the instrument panel.

Functional Interior Is Bigger on the Inside
Proving that small changes add up to big gains, the cargo area of the new Prius was expanded 0.4 inches in length and 2.2 inches in width by using a new and an improved layout of the battery cooling unit.
Rear seat legroom is enhanced by a new space-saving contoured front-seat design.
Viewed from the cockpit, the center cluster smoothly flows from the instrument panel to the console. Handy storage space has been added under the shift lever by taking advantage of the shift-by-wire system. Simple, fin-type air vents are consistent with the cabin’s efficient appearance. Judicious use of silver accents adds a finished, technical feel.
Touch sensors on the steering wheel switches are designed to reduce driver eye movement for better concentration on the road. When the driver touches the audio or info switch located on the steering wheel, a duplicate image is displayed on the instrument panel, directly in front of the driver. This system, called Touch Tracer, is the first system in the world to allow steering wheel controls to read out on the instrument panel.
The ECO indicator on the Multi-Informational Display (MID) provides driver feedback for lower fuel consumption.
In pursuit of developing various advanced technologies aimed at realizing sustainable mobility, Toyota will use plant-derived, carbon-neutral plastics in the 2010 Prius. The newly-developed plastics, known as “ecological plastic,” will be used in the seat cushion foam, cowl side trim, inner and outer scuff plates, and deck trim cover. Ecological plastic emits less CO2 during a product lifecycle (from manufacturing to disposal) than plastic made solely from petroleum; it also helps reduce petroleum use.
Safety Enhancements
The new Prius was designed to comply with class-top level collision safety performance in each global region of sale, and to accommodate increasingly strict safety requirements in the future.
In addition to advanced driver and front passenger Supplemental Restraint System (SRS) airbags front and rear side curtain airbags, driver and passenger seat-mounted side airbags and driver’s knee airbag are standard equipment.
Active headrests are used in both front seats to reduce the possibility of whiplash in a collision. Anti-lock Brake System (ABS), Electronic Brake Distribution (EBD), Brake Assist (BA), electronic traction control (TRAC) and Vehicle Stability Control (VSC) are included with Toyota’s standard Star Safety System.
Dynamic Radar Cruise Control system, using advanced millimeter wave radar, is an available option. The system also enables Lane Keep Assist, which helps the driver stay safely within the lane, and the Pre-Collision System, which retracts seatbelts and applies the brakes in certain conditions when a crash is unavoidable.
Next-generation Intelligent Parking Assist features simplified settings to help guide the car into parking spaces.
A backup monitor, which provides a view of rear obstacles when reverse is engaged, is available with an optional voice-activated navigation system.
Safety Connect, Toyota’s first safety and security service, includes automatic collision notification, stolen vehicle locator and an SOS call button. Safety Connect will be available a few months after launch.
The development of the Prius has required applications for over 1,000 patents filed across the world, of which 292 are U.S. applications.
Pricing for the 2010 Prius will be announced shortly before it goes on sale late spring.
2010 PRUIS PRELIMINARY SPECIFICATIONS

Do NOT follow this link or you will be banned from the site!